With a summer coup Monsignor Vincenzo Paglia has succeeded in getting the statutes approved of the Giovanni Paolo II Theological Institute for Marriage and Family Sciences which assign the control over what is taught and who teaches it, to himself. He now has the power to definitively distort the purpose of the institute desired by St. John Paul II, to purge unwanted teachers, and to reset teachings in line with Amoris Laetitia. 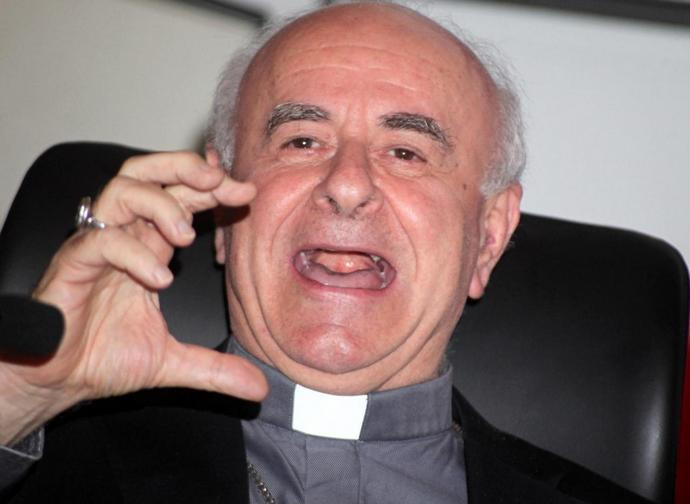 In the name of Amoris Laetitia, the hour of purge has arrived for the Pontifical Theological Institute John Paul II for Marriage and Family Sciences. This is the most obvious meaning of the approval of the Statutes and of the Order of Studies of the Institute commissioned by Saint John Paul II in 1982, and revolutionised by Pope Francis‘ Motu Proprio Summa Familiae Cura (September 2017). When the Motu Proprio was published, we wrote that the official line and objectives were clear but the decisive game would be played out over the statutes, because this is where the articles for the course structure, subjects taught and teachers are stipulated.

Even if the statutes, now approved by the Congregation for Catholic Education, have not yet been made public, the dean Pierangelo Sequeri’s recent statements, the events of the last two years and the first rumours, paint a fairly clear picture of what’s going on. Primarily, the concentration of power in the hands of the Grand Chancellor Vincenzo Paglia, the true dominus of the operation, authorises him to pick and choose his teachers and staff at will.

To have a comprehensive idea of the situation, it is necessary to revise the events that led to these statutes. The Motu proprio of 2017 marks an evident discontinuity with what St. John Paul II had intended for this institute and this also emerges in the way the current dean Monsignor Sequeri presented the new statutes in the Osservatore Romano. Saint John Paul II was well aware that the family was the focus of an attack which he repeatedly referred to as an apocalyptic battle. The John Paul II Institute for Studies on Marriage and Family - so it was called until 2017 - was therefore a centre of excellence in scientific study on the truth about marriage and family, as part of the Church's duty to "declare to all peoples God’s design for marriage and the family, for which the Church is bound to ensure with full vigour and human and Christian promotion."

In fact in these 37 years, the institute has responded effectively to this call by training thousands of priests, religious and laity, engaging in debates and discussions of the highest theological and philosophical level, publishing hundreds of volumes, accessible to everyone and not only experts: the latest publication, only days ago, is the Dizionario su sesso, amore e fecondità (Dictionary on Sex, Love and Fertility) with the contribution of dozens of international authors. Moreover, the institute has grown internationally over the years and established twelve centres - between branches and associated branches - in different countries of the world (just in the last two years under Paglia-Sequeri management, three associated branches have ceased to exist: Australia, South Korea and Colombia).

But none of this counts for the heralds of the new course, who believe a different and more up to date approach is now required. We need to "understand the family," explains Bishop Sequeri, it’s time to stop getting bogged down in doctrine, thus implying God's plan for the family is abstract and unrealistic. Instead, considerable attention is paid to sociology, psychology, history of cultures; multiplying and fragmenting studies, as if that will help us to understand what the family is.

But how does one go about changing an institution where the teaching staff, formed under Saint John Paul II, are particularly motivated and very united? First step: substitution. What was initially sold as an update or as a development, proved to be merely a smoke screen. In reality, the Motu Proprio Summa familiae cura with article 1, clearly states that the institute specifically desired by St. John Paul II "ceases to exist" and is replaced by a new one. This means that for the last two years, the institute has been living in limbo waiting for the statutes to be approved.

This takes us to the second step, which is the most tricky. Precisely the aforementioned explanation indicates that the purpose for change is not reform, but revolution: the statutes are not designed to provide an updated version of the previous ones, but as the first of a new institute, which has severed all ties with the past. In May 2018, at the Roman Institute board meeting and in June following the International board meeting, Monsignor Paglia presented statutes which concentrated power in his hands, giving him the right to choose teachers and subjects, thus canceling the old procedures whereby the teaching body was involved in all the institute’s most important choices. Notably, they stipulated a veritable upheaval in the order of studies. Moreover, it is unprecedented, that academic power is concentrated in the hands of one figure, the Grand Chancellor, who in any academic institution acts as a guarantee, without any direct influence on teaching matters.

Monsignor Paglia's proposal provoked a revolt by the teaching staff and put to death almost forty years of serious work. Faced with the risk of public scandal, Monsignor Paglia immediately withdrew his proposal, agreed that an internal commission would be formed - chaired by the dean Monsignor Sequeri - to draw up a set of new statutes, with the inclusion of contributions from the various international branches. After a few months the work was completed. Last March, the counter-proposal was presented to Monsignor Paglia for his approval. Obviously, the Grand Chancellor was expected to give his feedback, he had given his word that the new version of the statutes would be submitted to all the academic bodies before its approval would be sought from the Congregation for Catholic Education.

It proved to be a wait in vain. Only a month ago, at the last board meeting, there was still no mention of the statutes. Then a few days ago, there was a big surprise, the statutes had already been approved. Even if they are not public yet, Monsignor Sequeri’s announcement and the first rumours clearly indicate that in substance the statutes follow Monsignor Paglia‘s original proposal, concentrating an abnormal amount of power in his hands. A definite coup, in the middle of summer, a recipe for success to advance the revolution.

At this point it is easy to imagine what will happen next: since it is a new institute, all the staff, both teaching and non-teaching, will cease to be employed. Everyone will receive a letter indicating their destiny: there will be those who will be re-employed by the new institute, while the "unpopular members" will be sacked or found alternative employment. New compliant teachers will be introduced and gradually they will take control of the institute. Probably, only a few will be got rid of or relocated to start with, so as not to attract too much attention . But in any case one thing is clear, Monsignor Paglia is there to make a clean sweep of the institute and now has all the power he needs to reach that goal.