The Pope and the statuettes: a surreal situation

Speaking off the cuff to the Synod Fathers, the Pope asked for forgiveness for the pagan statuettes being thrown into the Tiber. However, the police have recovered them and on Sunday they may be exposed during the concluding Mass for the Synod on the Amazon. An incredible epilogue which signals a disaster for the Vatican spokesmen and exposes the Holy See to ridicule. 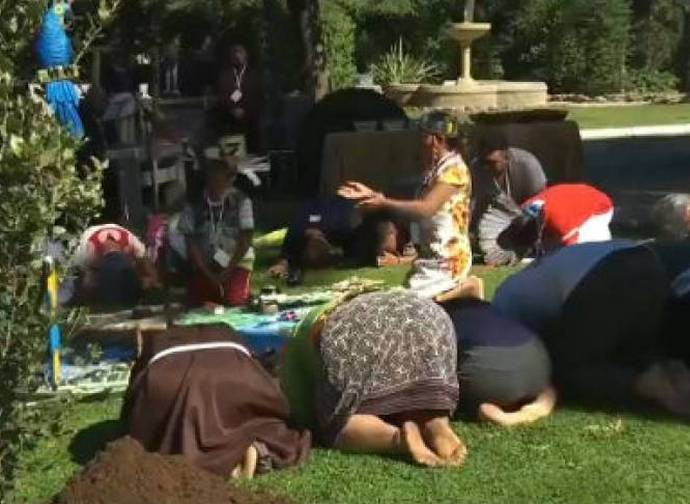 First: the Pope asks pardon for the persons who were offended by “the statues of pachamama that were taken from the church in Traspontina, which were there without idolatrous intentions and were thrown into the Tiber.” Second: the statues were retrieved and are currently safe and sound in the Italian Carabinieri Commander's office. Third: the police chief expressed his desire to follow up on any indications and initiatives in their regard as proposed by the Holy See: “For example this includes,” the commander reports, “the exhibition of the statues during the Holy Mass for the closing of the Synod.” Fourth: the Pope states he has delegated the final decision on the matter to the Secretary of State, Cardinal Parolin.

These are the main points of the brief spontaneous speech made off the cuff by Pope Francis to the Synod Fathers yesterday afternoon, October 25, as reported in their entirety in an evening statement by the Vatican Press Office.

It might not be worthwhile commenting, but in the light of these words, it's difficult not to think about those who put the Pope in this situation, or encouraged him to make such a surreal public speech. Let me clarify: by his own admission, Pope Francis does not watch television, does not go on the internet, and the only newspaper he browses is Il Messsaggero. Therefore, his source of information about the Church and the world, depends entirely on those who are closest to him, beginning with Father Antonio Spadaro – director of Civiltà Cattolica and grey Eminence of the pontificate – and Andrea Tornielli, editorial director of Vatican media. Two persons who cannot be considered casual bystanders, considering how active they have been during the whole affair concerning the statues. Nervous enough it seems, to lose their sense of the ridiculous (Tornielli‘s inappropriate quote of Saint Cardinal Newman, and the comparison to the statues destroyed by the Taliban and ISIS by Spadaro, gives an idea of the state they are in).

The fact is, there was a complete break down in the Vatican Communications Office over the affair of the statues, demonstrating its total inadequacy. In the face of scandal and the questions raised over the rites in the Vatican Gardens and in the Church of Santa Maria in Traspontina, there were only evasive and contradictory answers which worst of all, denied the evidence: just yesterday the Prefect of the Congregation for Communication, Paolo Ruffini, insisted that no pagan rite had taken place in the Vatican Gardens even though video footage shows to any level headed person, the exact opposite (see this brief clip: or this one).

And now it seems, not wanting to lose face, they have told the Pope their version of the facts and pushed him to take a stand which will silence their own critics. Normally, collaborators shield the Pope, here we have the opposite is happening. They assume a very serious responsibility.

Let’s examine the precise words the Pope used: he called them “statues of the pachamama.” As Wikipedia explains: “pachamama (also Pacha Mama or Mama Pacha) means Mother Earth in the Quechua language. She is a divinity venerated by the Incas and other people inhabiting the Andes mountain region, the Aymara and the Quechua. She is the goddess of the earth, of agriculture, and of fertility.” Thus, according to the Pope’s own words, we are talking about a pagan divinity, but from the Andes, not the Amazon. How can it be used in a church “without idolatrous intention?” There is also the police statement about the statues to consider: “Taken from a side altar of the aforesaid church where they had been used for prayer by the “Equipe Itinerante,” a Catholic group with its headquarters in South America that is participating in the Synod on the Amazon taking place in the Vatican.” Used for prayer: if this is what the police stated (we presume the police were not participating in the rites), they must have obtained the information from those who reported the theft, those directly involved, those who were praying to the idols.

Second point: the police operation. It is paradoxical that in the midst of controversy over security problems in Rome, police officers were employed to search for the statues in the Tiber and we wonder how many and if divers were also used. “The investigations are still on-going,” obviously at the request of the Holy See, which is anguished over the loss of the three pagan statues, meanwhile Aid to the Church in Need presents a dramatic report on the persecutions of Christians in the world.

Third point, this is the most absurd part of all: the police chief suggests that the statues in question might be exhibited at the concluding Mass of the Synod. There are simply no words to comment on this incredible affirmation. And the final decision is delegated to Cardinal Parolin. After this fine speech, why pass off to the Secretary of State a decision which, at this point, will be wrong no matter what it is? Does this mean there is another person to eliminate?  We certainly hope the Secretary of State will demonstrate the lucidity and courage necessary to avoid a scandal of unforeseeable consequences.

The fact remains that the leaders of the Vatican Communication, together with those numerous colleagues interested in a certain progressive agenda, are favouring an irreverent image of the papacy, giving the impression that the Vatican is a updated version of a Banana Republic. And whatever the ecclesial and theological positions are, this is a terrible service to the Church, as well as to the Pope whom they claim they want to defend. 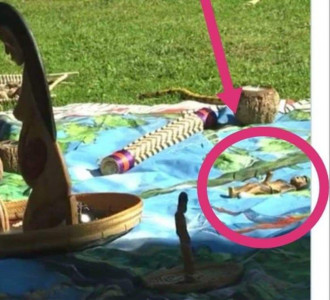 P.S.: Now that the statues of pachamama have been found, there is another mystery which needs to be resolved: there was also a statue of Priapus in the Vatican Gardens on October 4, but since then, it has disappeared and no one knows anything about it. It would be interesting to find out what happened to the statue; the police could investigate this as well. Perhaps they don’t need to look very far, he is probably in one of the Vatican buildings.