The Amazonian Rite: An Excuse To Fragment Catholicism

An Amazonian Rite? Then why not a Bantu Rite or a Pygmyan Rite, until there is a complete fragmentation of the Roman Rite? To cite the Ambrosian Rite as a model is in error, because the Ambrosian Rite developed as the result of a profound assimilation between the Roman Rite and the Eastern Rites in an Anti-Arian context. The para-liturgies of the last few weeks during the Synod reveal the deception of being “rituals” that have been made up at the table while being passed off as “Amazonian.” 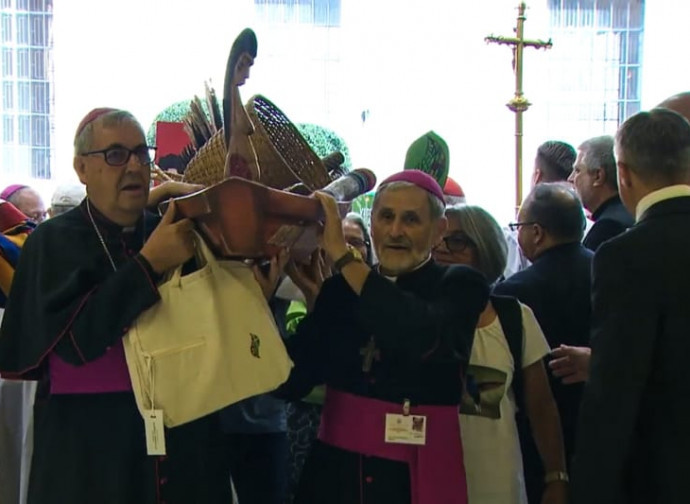 Not only married priests and deaconesses – various small discussion groups at the Synod on the Amazon have also made the request for an “Amazonian Rite.” The expression was used, enclosed in quotation marks, by Italian Circle B, by Portuguese Circle A, by Spanish Circle E. But even where these exact words are not used, the same idea has been suggested: “to elaborate a specific liturgy” (Portuguese Circle B), or better yet “to promote and live an incultured liturgy […] with its own signs and symbols.”

When we hear talk of an Amazonian Rite, several concerns ought to be raised. At the most immediate level, one should at least be concerned by the fact that an Amazonian Rite would mean that there could be a Bantu Rite tomorrow, and a Pygmian or Indonesian Rite the next day, until we arrive at a complete fragmentation of the Roman Rite.

Somebody, in order to tranquilize consciences, has noted that a diversity of rites already exists in the Church, including within the Latin Church, where the Ambrosian Rite is a witness to such pluriformity. So let’s consider the nature of the Ambrosian Rite. The Latin “brand” of this rite is beyond debate; and the profound fidelity of this rite to the ancient Roman Rite has been enriched by particularities that drew sap from at least two roots. First of all, a Christocentric vis [strength], in a decisively Anti-Arian key. Saint Ambrose had to fight against the Arians not only with ideas but he also had to oppose their physical presence in flesh and blood in Milan, in the form of the unwieldy presence of Auxentius [the Arian bishop of Milan], whom Saint Hilary of Poitiers “ecumenically” described as a devil. And secondly, there is the Eastern root, thanks to the presence of bishops in Milan of Greek origin, like Saints Anathalon and Calimerius, but also thanks to the contact which the church of Milan had with Eastern bishops, in particular during councils and synods. The least that can be said is that the Ambrosian Rite was not born from the fact that the “Ambrosians” of the time needed to express themselves with signs and symbols that were more refined to their own sensibilities; nor was it the fruit of meeting of liturgists who desired to distinguish themselves from the “Romans.” Instead, the rite grew as an effect of a profound assimilation of the Roman Rite with the Eastern Rites, and as an expression of a desire to reinforce faith in Christ in the face of aggression on the part of the Arians.

Listening to the statements at the press briefings of the last three weeks, and also paying attention to the esoteric para-liturgies, one has not exactly had the sensation of being in the presence of a greater emphasizing of those aspects of dogma which are threatened in our days. Nor has it seemed that the proposal of an Amazonian Rite has come from the desire of a better expression of Catholic unity that breathes with both lungs.

Example Number One: Mrs. María del Mar Bosch, one of the people in charge of the “moments of prayer” which are accompanying the present Synod, has finally revealed the occult nature of the statues which recently made a plunge into the Tiber: “She is a pregnant woman, whom we have used as a personified sign of our Amazonian land and of our common home in a broader sense – she is a symbol of an abundance, a harbinger of life and of the dangers that threaten it.” She then excluded the possibility that we are dealing with objects that are linked to the native cult and religion of the Amazonian peoples: “They are objects made by local artisans, typical objects of décor – even if they had once been conceived of as something similar – nor are they commonly perceived as objects of worship, nor even less have they been intended and proposed by us in any other way than the one just described.”

This clarification that was given is enough to impute the accusers of idolatry: they were not idols, therefore the rites linked to these objects were not idolatrous. To this author, however, the clarification suggests exactly the opposite. Because idolatry is not only the adoration of statues which have a precise ID card, in terms of the history of religions; an idol is anything which man places at the center of his life, in the place of God and to whom he prostrates himself in adoration. Now, to personify the Amazonian land or the Earth in general, to think up a “ritual” that places these personifications at the center, that foresees prostration in front of such personifications, what else is this if not an act of idolatry? We are told: these were not indigenous idolatrous rituals. Perhaps this is true: but then we are dealing with transplanted idolatrous rituals, created by a committee sitting around a table who wanted to express adoration for the personification of the Earth. And this is not idolatry?

Example Number Two: On Saturday, October 12, in the church of Santa Maria in Traspontina, there was a celebration of the “Missa da Terra sem males [Mass of the Earth Without Evils].” And also in this case, we are looking at a completely original invention, this time by Bishop Pedro Casaldáliga Plà. The newly-minted Cardinal Michael Czerny was present at the celebration and seemed to have no objections. This “Mass” was designed for the “martyrs” of the Amazonian land, or better, for the martyrs “whom we Christians have made,” according to the explanation of Casaldáliga. You can imagine the “proper” of this Mass: the theme is the continuous mea culpa of us Christians and the warping of the natural innocence of the indigenous populations that we have stained. As an example, let’s look at a small section of the Penitential Rite. A cantor, who represents an indigenous man, sings “I lived in an uncontaminated nudity / playing, planting, loving / generating, being born, growing / a pure nudity of Life.” The choir responds to him: “And we cover you with clothes of malice. / We violate your daughters. / We have given you our own Hypocrisy as your Moral Code.” Amen.

Example Number Three. At the briefing on October 9, Bishop Erwin Kräutler clearly affirmed that there is no other path for resolving the problem of the shortage of priests than the ordination of married men. The reason? “The indigenous peoples do not understand celibacy, and they say so openly.” Therefore if they do not understand it, we take it away. A pastoral approach that seems to follow a strange maxim: what you already know and love, we announce to you, and what you do not know and love, we have no intention of announcing to you.

Let’s try to pull out the main thread of the discussion. What do these three examples of “inculturation” have in common? The least that can be said is that they shrug off the person and teaching of Jesus Christ. Did not Saint Paul write: “At the name of Jesus every knee shall bend” (Philippians 2:10)? And we bend the knee before the Amazonian land. Did not Saint Paul write: “All men have sinned and are deprived of the glory of God” (Romans 3:23)? And we instead celebrate the original immaculateness of the Amazon peoples. With regard to those who have become eunuchs for the kingdom of heaven, did Jesus not say: “Let he who can understand, understand” (Matthew 19:12)? But we say that we should follow those who do not understand.

In a nutshell, what is happening is that all of these people, including bishops and cardinals, are extremely convinced that evangelization ought to be done according to our own ideas; and as a result the liturgy too should be created by a committee around a table, conformed to these ideas, as collegial and synodal as you like, but always our own ideas. Practically speaking, the liturgy is no longer something that we must enter into in order to learn how to adore the Lord, but rather it is the liturgy that must enter into our own mental cages.

And so, can we at least express the doubt that perhaps this is not the ideal climate for thinking about creating an Amazonian Rite?