Burke and Brandmüller: Denial of divine law is at the root of sexual abuses

«Sexual abuse is blamed on clericalism. But the first and primary fault of the clergy does not rest in the abuse of power but in having gone away from the truth of the Gospel.» 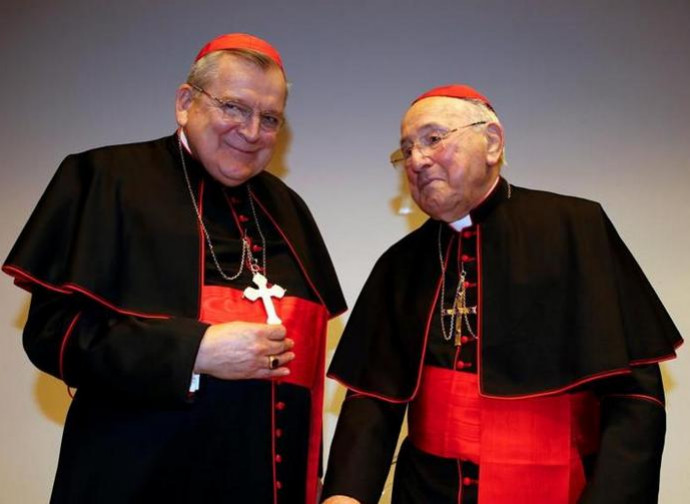 Open Letter to the Presidents of the Conferences of Bishops

Dear Brothers, Presidents of the Conferences of Bishops,

We turn to you with deep distress!

The Catholic world is adrift, and, with anguish, the question is asked: Where is the Church going?

Before the drift in process, it seems that the difficulty is reduced to that of the abuse of minors, a horrible crime, especially when it is perpetrated by a priest, which is, however, only part of a much greater crisis. The plague of the homosexual agenda has been spread within the Church, promoted by organized networks and protected by a climate of complicity and a conspiracy of silence. The roots of this phenomenon are clearly found in that atmosphere of materialism, of relativism and of hedonism, in which the existence of an absolute moral law, that is without exceptions, is openly called into question.

Sexual abuse is blamed on clericalism. But the first and primary fault of the clergy does not rest in the abuse of power but in having gone away from the truth of the Gospel. The even public denial, by words and by acts, of the divine and natural law, is at the root of the evil that corrupts certain circles in the Church.

In the face of this situation, Cardinals and Bishops are silent. Will you also be silent on the occasion of the meeting called in the Vatican for this coming February 21st?

We are among those who in 2016 presented to the Holy Father certain questions, dubia, which were dividing the Church in the wake of the conclusions of the Synod on the Family. Today, those dubia have not only not had any response but are part of a more general crisis of the Faith. Therefore, we encourage you to raise your voice to safeguard and proclaim the integrity of the doctrine of the Church.

We pray to the Holy Spirit, that He may assist the Church and bring light to the Pastors who guide her. A decisive act now is urgent and necessary. We trust in the Lord Who has promised: “Behold I am with you all days, even to the consummation of the world” (Mt 28,20).