If the term "quality of life" is allowed to replace "the sacredness of life", then each of one of us is in danger. This is why, even if we are not fully aware of it, Alfie's life is the same life in us all; the battle for Alfie is the battle to affirm our own life. 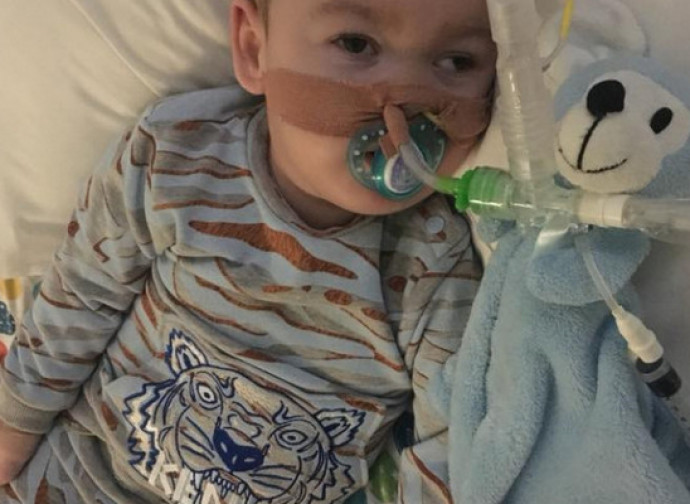 What is so scary about a two year old sick child and his young parents to warrant calling the police to block all the entrances and exits to the hospital and close the airports? There has to be some terrible danger at large if such a show of strength is required and if it is necessary to lie constantly to justify Alfie's imprisonment in Alder Hey Hospital in Liverpool.

The issue is that this baby is a sign of contradiction, just his presence alone is enough to unmask the true totalitarian face of a country that boasts to be a pillar of democracy. Behind the words "freedom of choice" and "self-determination" there is death, wanted and pursued against its citizens by a Power that above all calculates to preserve itself. A defenceless baby who obstinately fights to stay alive is a manifesto against death, and at the same time condemns those doctors, who have forgotten what it means to "take care" of their patients. And the twenty-year-old parents who face an impossible challenge like David against a Goliath  - who is far greater and menacing than the biblical one -  show us why the big international powers are so determined to destroy the family: that bond of blood, incorporates the most profound affections, evokes an invincible reciprocal belonging and generates a relationship that is ultimately the last point of resistance against a Power that wants us to be individuals untied from any relationship in order to control every aspect of our life.

That is why Alfie must die, because Power can not tolerate such an affront; if life wins, it would call into question the system of death we all live in convinced that we enjoy some so called freedom. It would mean more and more people would have their eyes opened to the true nature of modern states and supranational organisations such as the European Union. And this is what's already happening thanks to Alfie. The astonishing proof, is that growing crowd which has protested in front of the hospital appealing for Alfie's life for the last two days.

So why do thousands of people stand peacefully in front of the hospital in Liverpool, for long hours, even at night, to demonstrate for a baby and keep a family company whom they have never met personally? Without doubt, part of it, is the obvious injustice committed against a seriously ill baby. There is also the intolerable violence which has been unleashed against Alfie's parents, a fury close to torture. But even this is not enough to explain the reason for this spontaneous mobilisation. In the end, perhaps unconsciously, it's because we all know that together with Alfie each one of us is being attacked personally.

If the term "quality of life" is allowed to replace "the sacredness of life", then each of one of us is in danger. If life is sacred it belongs only to God and no man has the right to decide if we are to be born and when we should die, life is by nature greater than ourselves. But if we evaluate life according to human measures, if we make rankings to establish the quality of life, then each of us is at the mercy of Power, which in turn will establish from time to time - according to convenience and utility - the boundaries of life: how many children we can have, if you can give birth to a handicapped child and when to remove that disturbance from this world. Moreover, it questions us about the meaning of our life, because in the face of a patient that the State wants to eliminate so violently, we wonder if our life, my life, with that desire for absolute and infinity which defines us can be reduced to efficiency and usefulness and ultimately destroyed.

This is why, even if we are not fully aware of it, Alfie's life is the same life in us all; the battle for Alfie is the battle to affirm our own life. Life itself.