Vietnam, the murky truth about human trafficking to the UK

"No-one wants to live in a communist state and Vietnam's economici boom is fake news. That's why people escape. Don't believe the government, only certain party members and officials are getting richer, ordinary people are becoming poorer." A representative of the Vietnamese community in the UK speaks out. 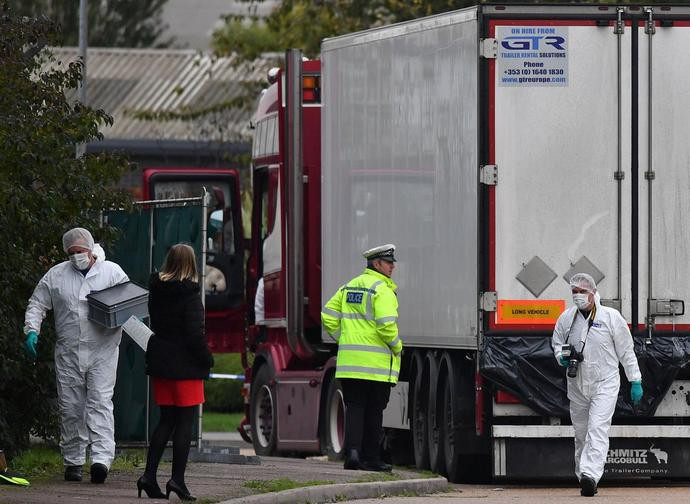 “No-one wants to live in a communist state and Vietnam’s economic boom is fake news. That's why people escape. Don’t believe the government, only certain party members and officials are getting richer, ordinary people are becoming poorer.” A representative of the Vietnamese community in the UK describes the paradox of a rapidly expanding economy and the sinister reality of human trafficking to the UK recalling the tragedy of the 39 (8 women, 31 males and 2 boys aged 15) who suffocated in a refrigerated lorry on October 23, in Essex, England.

Since the news broke, authorities in the UK and Vietnam have made a number of arrests and the 26 year old lorry driver Maurice Robinson has pleaded guilty at the Old Bailey in London to conspiring with others to assist illegal immigration. The Daily Compass spoke to the representative about the reasons people flee Vietnam. He has asked to remain anonymous to avoid possible repercussions. What emerges is a dismal picture of life in communist Vietnam.

We are used to hearing about the plight of refugees from Africa and the Middle East but not from Vietnam until the tragedy of the 39 found dead in a lorry container in England. Why are people fleeing Vietnam?
Until 1975 nobody wanted to leave Vietnam. But the truth is no-one wants to live in a communist state. Vietnam might be the fastest growing economy in South East Asia, but only those within the Communist Party of Vietnam (CPV) and state-owned companies are benefiting from the new global trade deals. The rich are becoming richer and the poor poorer. Their struggle is to put food on the table every day and this is the reason Vietnamese try to reach the UK. Every year it is estimated about 18,000 migrate illegally or legally to Europe, rather than be condemned to poverty for the rest of their lives. 90% of students who study abroad apply for visas to remain in the host country rather than return to Vietnam.

Why England?
Vietnamese are not the only ones fleeing their country. The majority from Africa and the Middle East prefer to go to Germany and France, the UK has become the most popular destination for Vietnamese. The UK has always been very tolerant and there is a strong community integrated here to support newcomers with accommodation and employment. When they arrive they usually find legal work in nail bars and restaurants. But as they are also under enormous pressure to repay their loans as quickly as possible, some turn to prostitution and the cannabis industry to increment their salaries to send much needed money back to their families.

Most of the 39 came from the same Ha Tinh district and were Catholic. Did religious persecution play any part in their decision to leave?
The reason is purely economic. It is ironic that the founder of the communist state, Hồ Chí Minh, came from the same area as the victims. The problem is the Communist dictatorship and its repression of any dissenting political views and the lack of civil liberties. For example, everyone has Facebook or a form of social media but no-one dares to write their opinions or thoughts about the government because they are afraid of repercussions. This is the reason for leaving, not religious persecution.

Have the relatives of those who tried to escape suffered any government repercussions?
No, at least not yet, because they know the world’s attention is focused on the news at the moment. But instead of supporting the impoverished relatives of the 39 found dead, the government has told them they will have to bear the costs and have offered them loans. The cost is approximately £2,200 to repatriate the body and £1,400 to bring back the ashes. In Vietnamese culture, honouring the dead is very important and the families want to bring the bodies back not their ashes. Groups in the UK and Vietnam have been crowdfunding to pay for the costs of transportation to help the families. The government could do more.

Why do families choose to pay £40,000 to human traffickers? Why don’t they use that money and start a business in Vietnam for example?
There is too much corruption and nepotism to start any commercial activity. Keeping people in poverty increases the CPV power and control. It’s a tragedy. In Europe you have freedom but don’t appreciate it or know what it means.The only person who really understood communism, was Saint John Paul II.

Will this tragedy discourage others from leaving in the future?
Definitely not. As long as the CPV is in power, people will keep trying to escape. Vietnam was immersed in grief when the news broke about the 39 but ultimately they are considered very unlucky. Illegal emigration is still worth the risk and the only option for a better life and future. Human trafficking is on the increase despite the costs and hazards.

Is there a solution?
As long as the government acts unjustly and not in the interests of all the Vietnamese people, as the Rev Simon Nguyen said in a prayer service in London, there will always be people risking their lives “seeking freedom, dignity and happiness.”