«The Church today has renounced to preach the whole truth»

"Speaking of clerical child abuse while ignoring the fact that over 80% of abuses are homosexual acts, means there is no intent to resolve the issue". "The most serious problem in the Church today is its tendency to compromise with the world and withdraw from proclaiming the whole truth.” Cardinal Gerhard Müller speaks out. 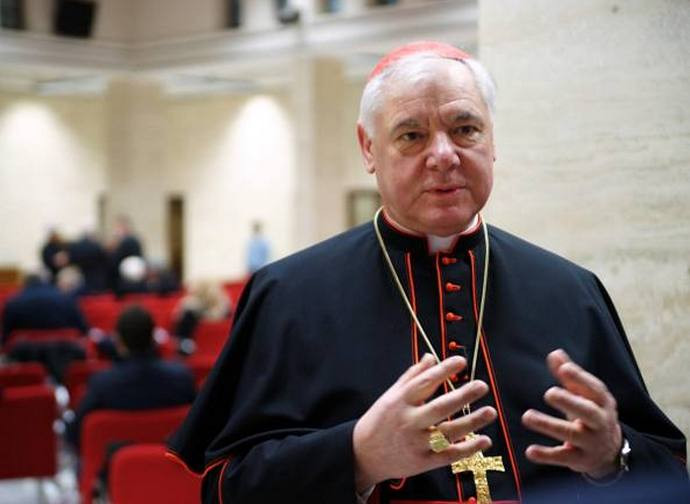 This is the translation of a shorter version of  La Nuova BQ interview with Cardinal Müller, published by the Italian newspaper Il Giornale.

"Speaking of clerical child abuse while ignoring the fact that over 80% of abuses are homosexual acts, means there is no intent to resolve the issue". "The most serious problem in the Church today is its tendency to compromise with the world and withdraw from proclaiming the whole truth.” Cardinal Gerhard Müller speaks calmly, but his judgments come across loud and clear. He welcomes me cordially in to his apartment, just a stone's throw from Saint Peter’s Basilica, which he kept despite being dismissed by Pope Francis in a somewhat harsh handed way in July 2017, when he did not renew his position as prefect of the Congregation for the Doctrine of the Faith.

Cardinal Müller, in twenty days there will be a summit in the Vatican on sexual abuse, a scandal that is obscuring the image of the Church and at the same time causes many tensions within ...
It is terrible for the Church that priests are involved, men who instead of conducting exemplary lives abuse their mission. Representatives of Jesus Christ the good shepherd acting like wolves: it is a perversion of their mission.

The overwhelming majority of sexual abuses committed by clerics are actually homosexual acts.
It is a fact that over 80% of child victims of abuse are males and teenagers. We must face this reality, they are statistical figures that cannot be denied. Anyone who ignores the facts does not want to solve the problem. They make accusations against those who do tell the truth by saying they have a general bias against homosexuals. But homosexuals as a category do not exist, it is an invention. It is evident they speak out to cover up their own interests. In Creation, the concept of homosexuality does not exist, it is an invention that has no basis in human nature. These tendencies are not an ontological but psychological issue. Some people want to make homosexuality an ontological datum.

In view of the summit at the end of February, there are those who want to use it as an opportunity to argue that it does not matter if a priest has homosexual tendencies, the important thing is that he lives chastely. In Germany, there are bishops who have already made declarations to this effect.
It would be a crime against the Church: exploiting sin to establish or normalise a sin against the 6th commandment, is a crime. There is no way homosexual acts or even disordered sexual acts can be legitimised. If we believe in God, we believe that the 10 commandments are the direct expression of God's saving will towards us, they are the substance of man's morality and of his happiness, they are the expression of life, of the truth of God.

In recent days, the case of an ecumenical Mass in Milan was denounced, in which a female baptist pastor read the Gospel, preached the homily and distributed the Eucharist after standing behind the priest during the consecration. The parish priest explained that transubstantiation is only one way of understanding the Eucharist. This kind of ecumenism is not even an isolated fact.
It almost amounts to a blasphemous act. There is a crass ignorance among priests, bishops and even cardinals: they are servants of the Word of God but they do not know it and they do not know the doctrine. If we talk about transubstantiation, the Fourth Lateran Council, the Tridentine and also Vatican II as well as some encyclicals such as Mysterium Fidei (1965) have explained that with this expression the Church recognizes the true conversion of bread and wine into the substance of the body and of the blood of Jesus Christ. In England at the time of Edward VI and Elizabeth I (XVI century) there was the death penalty for those who believed in transubstantiation. Many Catholics were martyred and they did not sacrifice their lives because of one of many ways of understanding the Eucharist, it was for the truth of the sacrament.

But what can a member of the faithful do if they end up at a mass like that?
They must protest publicly. They have the right to leave or if they feel able to speak up should say: "I protest against this desacralisation of Holy Mass; I came here to celebrate the Catholic Mass not to participate in some construction of a mass by a parish priest who knows nothing of the Catholic faith.”

Following the Lutheran Reformation Jubilee, we now have the 800th anniversary of the meeting between St. Francis and the Sultan. Courses of Islam are already taking place in parishes and imams are being invited to churches to explain who Jesus is for Islam ...
For us, it is an offence to say that Jesus is only a man, that He is not the son of God. How can you invite someone to come to church to offend you? There is a bad conscience present today in Catholicism towards one's own faith and instead we kneel before others. First Luther's jubilee, now that of St. Francis: it is just a way to bring protestantism in and Islamise the Church. This is not true dialogue, some of us have lost our faith and want to become slaves to others to be loved.

What is the most serious problem the Church faces today?
The relativisation of faith. It seems too complicated to announce the Catholic faith in its entirety and with an upright conscience. Yet the world today deserves the truth and the truth is the truth of God the Father, Son and Holy Spirit. False compromises do not help people in today's world. Instead of proposing the faith and educating people, we tend to relativise, we always say a little less, less, less, less ... Christianity has become concerned with the world, it is reduced to please everyone today and consequently people are deceived.

The Pope constantly emphasises the concept of universal Fraternity. What is intended by this expression to avoid people being confused?
I was not happy at all when the Masons praised the Pope. Their fraternity is not the brotherhood of Christians in Jesus Christ, it is much less. On the basis of creation we are all children of God. We all have a father in Heaven, but this father revealed himself in Israel, to Moses, the prophets and finally in Jesus Christ. Brotherhood is surely to avoid wars, to avoid quarrels between peoples, but we can not reduce fraternity only to this. A universal religion does not exist, there is a universal religiosity, a religious dimension that pulls everyone towards the mystery. Sometimes absurd ideas circulate, describing the Pope as head of a left-wing International or head of a universal religion, but this is absolutely against the establishment of the papacy of Jesus Christ. Jesus instituted Peter as the first and principle of his succession in the papacy because of his confession or profession of faith: "You are the Christ, the son of the living God". This is the substance of the papacy, it is the voice of the confession of the faith of the Church and not the head of the UN.
(Translated by Patricia Gooding-Williams)