The bishops of Portugal and Spain are carrying out an epochal salvific act with the Consecration to the Sacred Heart of Jesus and the Immaculate Heart of Mary. We implore  all bishops to imitate them today. The Lord is allowing, in His infinite mercy, that we experience first-hand the great fragility of man, of his health, of his economic systems, of his earthly certainties. And He is making it clear to the whole world. This is a great warning, and it would be wrong and a harbinger of disastrous consequences not to accept it. 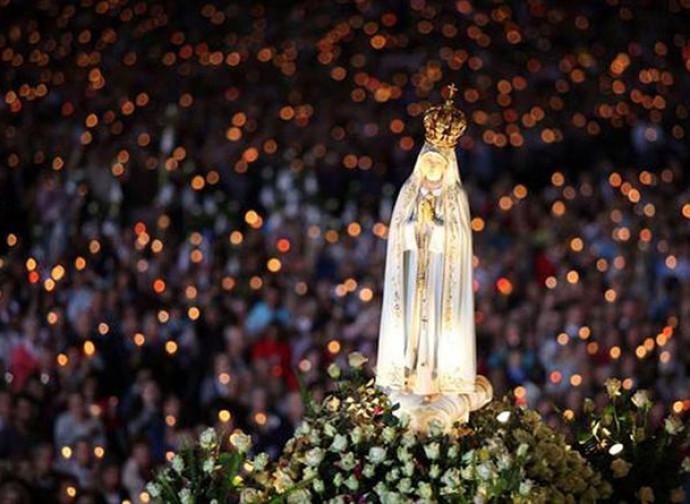 “In Portugal, the dogma of faith will always be preserved...”. These are the last words of the second part of the secret of Fatima, words that for more than a century have made it necessary in some way to look at Portugal with particular attention, to understand the signs indicating the direction to take in the face of the many changes that have upset the world and shaken the faith of entire nations. In Portugal there is a very peculiar phenomenon, which was also common in Italy back at the time of Don Camillo: one can be atheist, communist, priest-eater, but when She, the Most Holy Virgin of Fatima is mentioned, you doff your hat as a sign of respect.

And even today, while there is trepidation about what is happening in the healthcare sector, but even more about the decisions that have been taken at the political and ecclesial level, Portugal remains a beacon of light.

Today, the feast of the Annunciation of the B. V. Mary, Cardinal D. António Marto, Bishop of Leiria-Fatima, at the end of the Holy Rosary which will be prayed at 6:30 p.m. at the Shrine of Fatima (and broadcast here), will renew the consecration of Portugal to the Sacred Heart of Jesus and to the Immaculate Heart of Mary. The Spanish bishops will also be there with them.

The first consecration dates back to 13 May 1931, when the bishops, in the presence of three hundred thousand faithful, sought refuge in the Immaculate Heart to be spared from the plague of Communism, which was invading Europe, in particular neighbouring Spain.
And Our Lady did not withhold her special protection: the Civil War did not involve Portugal and the nation was spared the devastation of the Second World War. The consecration was renewed seven years later, to keep the vow that the Portuguese bishops had made in 1936: they had asked to be spared from the Communists; “in return” they would renew the consecration, to make known to the whole world the power of the mediation of Mary Most Holy. The Portuguese bishops had taken literally the words Our Lady had addressed to Lùcia on June 13, 1917: “Do not be discouraged, I will never abandon you. My Immaculate Heart will be your refuge and the road that will lead you to God”. God has established a refuge, as He did with Noah, to save His own from the storms of the world; those who enter this refuge do not perish.

In those years the exceptionality of Portugal, compared to the rest of Europe, was visible to all. Cardinal Cerejeira admitted candidly that “if we see the two years that have passed since our vote, we cannot but recognize that the invisible hand of God has protected Portugal, saving it from the fury of war and the scourge of atheistic communism”.

On 2 December 1940, as the War raged, Sister Lùcia confided in a letter to Pius XII the reason why Portugal was preserved from the carnage: “Holy Father, Our Lord grants special protection to our country in this war, through the Consecration of the Nation, carried out by the Portuguese prelates, to the Immaculate Heart of Mary, as proof of the graces that would be granted to other nations if they too consecrated themselves to Her”.

Our Lady also explicitly asked Italy for this consecration. On 19 September 1995, seven months after the statue in Civitavecchia shed tears of blood, Our Lady appeared to the Gregori family, saying: “Your Nation is in danger... Consecrate yourselves to me, to my Immaculate Heart, and I will protect your Nation under my mantle now full of graces. Listen to me, I beg you, I beg you! I am your Heavenly Mother, please do not make me weep again to see so many of my children die for your faults by not accepting me and allowing Satan to act”.

So what you are reading is not a simple article, but a heartfelt appeal, a poor echo of that “I beg you!” uttered by Our Lady. The Lord is allowing, in His infinite mercy, that we experience first-hand the mankind’s great fragility, of his health, of his economic systems, of his earthly certainties. And He is making it clear to the whole world. This is a great warning, and it would be wrong and a harbinger of disastrous consequences not to accept it. Faced with this situation, which has taken us all by surprise, God once again extends His hand to us, offering us a refuge: the Immaculate Heart of His Mother.

The bishops of Portugal are carrying out an epochal salvific act: we ask, we beseech all bishops to imitate them. As soon as possible. It is above all to our Pastors that this help from Heaven is directed: let them grasp this motherly hand, which will draw them out of the difficult situation in which we find ourselves and which is paralyzing the life of our Church. Let us leave aside theological disputes and human reasoning and, with simplicity and candour, obey our Mother's request.

Let us unite on March 25th at 6.30 p.m. to the prayer of the Holy Rosary which will be prayed at Fatima and to the act of consecration. Let us consecrate ourselves, our families, our parishes, our cities and implore Our Lady to touch the hearts and minds of our Bishops so that they too may perform this act on which the eternal life and salvation of millions of people may depend.

Immaculate Heart of Mary, intercede for us.